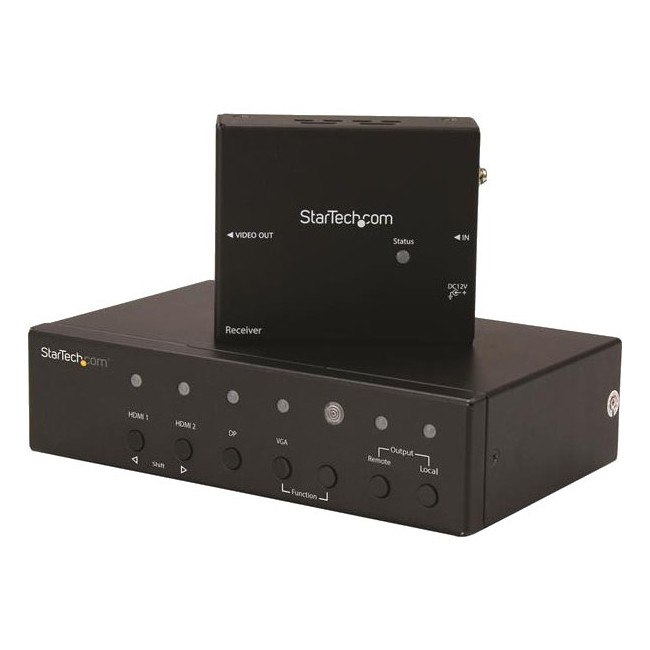 Connect your laptop to a remote display over standard CAT5 or CAT6 cabling, and easily swap between HDMI, DP or VGA video sources. This multi-input video extender kit uses HDBaseT™ technology to extend your video signals up to 230 feet (70 meters) over a single CAT5e or CAT6 cable. It features a built-in video switch that enables you to choose which video source is outputted from four independent video sources (2 x HDMI, 1 x VGA and 1 x DisplayPort).The video extender supports Ultra HD 4K and Full HD 1080p video resolutions, with support for the accompanying digital 7.1 audio.

Seamless multi-interface operation, with a switch and extender in one

This HDBaseT extender features a built-in converter switch, so you can connect two HDMI sources as well as a VGA and a DisplayPort video source to the same remote HDMI display, without having to use additional adapters or scalers or a separate video switch.

With support for multiple video sources and HDBaseT, this extender is the perfect solution for adding a large display to your boardroom or classroom, enabling BYOD laptops with HDMI, DisplayPort or VGA outputs to share their display with the room.

The extender switch ensures hassle-free operation, with two different auto-switching modes: auto-detect switching, which detects and selects a newly connected device, or priority selection, which lets you choose which port should be activated by default for automatic switching.

The multi-input video extender kit is perfect for digital signage applications, where an automatic switch can replace a failed source with a secondary input to avoid embarrassing video outages. Plus, the combined built-in HDBaseT functionality means you can connect a remote digital signage display with one kit that reduces failure points.

Hassle-free integration with your existing infrastructure

The kit extends your video signal over a single cable, unlike some video extender systems that require two cables and only offer minimal audio support. Extending your video with one cable reduces potential failure points and also lowers your cabling costs.

With high-quality HDMI cables beginning signal degradation at 30 feet, it can be difficult to maintain the brilliance of 4K video even at shorter distances. But with HDBaseT, you'll be amazed at how your Ultra HD picture -- four times the resolution of high-definition 1080p, is just as brilliant even at distances up to 130 feet from your video source.

Even if you're not running 4K, HDBaseT supports High-Definition 1080p and lower resolutions at even greater distances, up to 230 feet from your source, giving you peace of mind knowing that this extender will comfortably work with any HDMI video source and display.

HDBaseT is a zero-latency connectivity standard that's revolutionizing HDMI distribution. HDBaseT uses an advanced method of modulation that enables you to distribute uncompressed HDMI audio and video, along with additional signals, over a single Ethernet cable. Offering greater versatility than traditional HDMI extenders and longer distances than HDMI cables alone, HDBaseT is the clear choice for every integrator and system designer, because it can do so much, with just a single cable.